The 12 Most Chemically Ridden Produce Items You Should Buy Organic 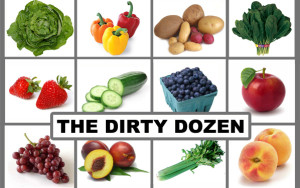 I wanted to start this one off with the positives. I have noticed that in grocery stores these days, more and more organic items are stocked on the shelves and in produce aisles. While organic doesn’t necessarily mean the food is amazing for you and completely clean, it is certainly cleaner than conventional produce. By law, any produce certified as organic cannot be GMO, which is a big plus. Sure you may have to pay more for organic produce, but in research I have been doing (which I intend to report on sometime soon) not only is organic produce better for you than conventional because of the lack of pesticides, but the farming practices and lack of chemicals in organic farming creates a more nutrient dense product. While there has been a lot of mis-information spread lately about this in mainstream media and by certain companies, the science behind their claims is quite flawed.

Not all of us can afford eating a completely organic diet, but this doesn’t mean we should not buy produce because of pesticides. It’s clear that eating conventional produce is much better than a diet that is more focused on processed foods and animal products. So if you are tight on resources and have to focus on only buying certain items organically, check out this list to know how to make smarter choices at the market.

When it comes to these items, try to buy these in organic form to avoid the excessive amounts  of pesticide.

These 15 produce items are known by the EWG as the “clean 15″. They have the least amount of pesticides and would be considered the items to buy if you can’t afford to go completely organic.

Based on an analysis conducted over a period of time between 2001 – 2009 by the USDA and FDA, 53 popular produce items were tested creating a series of 51,000 tests. The produce items were rinsed and peeled to recreate the general conditions in which they are consumed. The conclusion of the analysis confirmed that if someone were to eat from the clean 15 and purchased organically from the dirty dozen, they would lower their pesticide intake by 92%.